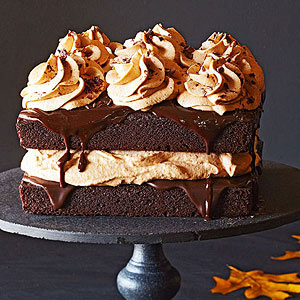 By Manager@Karaglen27th Jan 2019 No Comments

We never need an excuse to chomp down on some delicious chocolate cake at Karaglen SuperSpar. That’s exactly why we love to celebrate special international food days. January 27 is no exception. Today is National Chocolate Cake Day!

Interestingly enough, between 1830 and 1840, Chocolate Cake was consumed as a beverage! It wasn’t until much later that the idea of a baked chocolate cake took the world by storm and we haven’t looked back since. It is believed that the first ever chocolate cake was created in 1765 when a doctor and a chocolate maker teamed up.

The two ground up cocoa beans to form a thick syrup. This concoction was then poured into containers shaped like cakes and shipped off. These chocolate cakes were then intended to be transformed into a much-loved chocolate beverage.

Check out a few of our favourite chocolate cake variants below.

In fact, chocolate cake is so popular that people around the world have put their own creativity into producing some of the strangest masterpieces. Mike Cooper from England set a particular standard when be baked a fully functioning Angry Birds birthday cake for his son’s 6th birthday. Also to be noted here is the creation of the world’s biggest wedding cake. The cake measures 15 ½ feet tall and was able to feed 1500 people.

For the chocolate cake:

The cake batter will be very thin after adding the boiling water. This is correct and results in the most delicious and moist chocolate cake ever tasted.