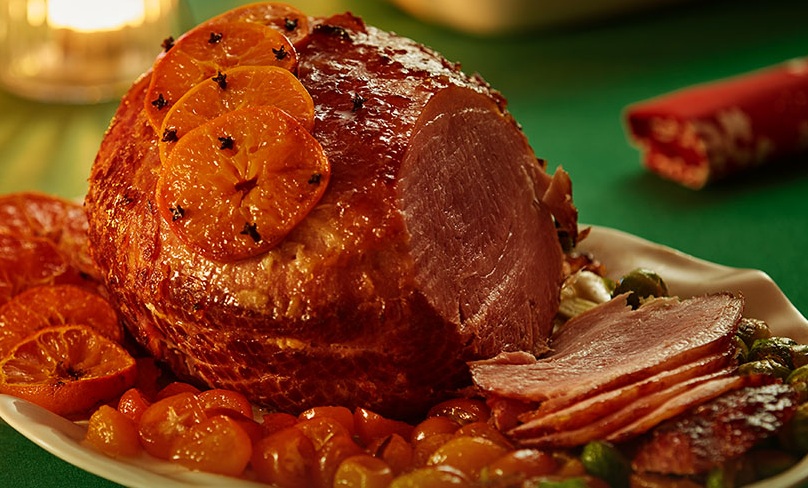 #GammonEssentials – Everything you need to know about cooking a gammon

By Manager@Karaglen15th Dec 2020 No Comments

Traditionally served around Christmas time Gammon is a favourite in South African households and our Gammon Essentials will help you prepare this tasty meat all year round. Gammon is a ham which has been cured or smokes similar to bacon. The meat is found on the hind leg of the pig. Most people find selecting and cooking a gammon to be a daunting task but truthfully it should not be.

At Karaglen we love the idea of finding Gammon all year round. The first step in our Gammon Essentials is choosing to have the bone or not. Other than that you simply need to make sure that the Gammon you choose will be enough to feed your family and possibly have a little left over for sarmies the next day.

The first thing that you need to know about a bone-in gammon is that it will take longer to cook. Gammon with a bone-in is also more difficult to carve. On the upside, however, bone-in gammon is usually cheaper per kg. On the other end of the scale is the bone-out gammon. This cut of meat has been removed from the bone and rolled. Bone-out gammon is usually covered with netting and can be carved the same way one would beef.

Gammon Essentials – how much Gammon should I buy?

If you are planning on serving the gammon as the main meat at dinner then ideally you would need to go for about 200g per person. If you are serving gammon along with other meats then you are going to need a little less. A quick guide would be 1.7kg of bone0out gammon can serve up to 10 people. The same bone-in gammon would serve up to 8 people.

Soaking overnight is the first thing you need to do when preparing to cook your gammon. To soak a gammon properly, simply put it in a large bowl and cover it with fresh water. If you are making use of a frozen gammon, you can defrost the meat in the water. The gammon will need to stand overnight. The soaking process removes all of the excess salt on the gammon.

To roast or to boil

There are two ways to cook gammon. You can either roast the meat or you can boil it. If you are going to boil your gammon you will need a large pot. You should boil the meat for 20 minutes for every 450g plus an additional 20 minutes. Always remember to keep the water topped up. Leave the Gammon to cool in the water.

Roasting of the Gammon can be done in the oven or over the fire. Simply place the gammon in a large roasting tray and cover with foil. Roast at 180°C for 30 minutes per 450g plus an additional 30 minutes. 30 minutes before the end of the cooking time remove the foil.

You will know when your Gammon is cook properly by inserting a knife into the cut. If the meat is still a little springy then you should cook it for another 15 minutes and test again.

Glazing the meat is the most important step. Once you meat is done and cooled after boiling or in the last 30 minutes of roasting you need to remove the outside skin. This skin can be discarded. Cut away any excess fat but leave about 1cm of fat to cover the meat. Score the fat with a knife to create a diamond pattern. Brush your glaze over the Gammon and either grill for 5 minutes, if you have boiled the meat or return to the oven for 30min if you have chosen to roast. The glaze should be re-applied every few minutes. Once done your glaze should be golden. Leave the Gammon to rest for a few minutes before serving.

Check out these tantalising Gammon recipes:

Gammon with a Pomegranate and Pink Peppercorn Glaze

Gammon Glazed With Brandy and Coke