“Another year, another Christmas party and what a fantastic event. The NEWS, Karaglen SuperSpar, 7 Eagles Spur and De Backery all ‘came to the party’ by spoiling our little ones at Pinocchio. Many ooh’s and aah’s were heard as the children unwrapped their gifts from Father Christmas, revealing the generosity of the wonderful Edenvale and Bedfordview public,” said the principal, Cheralle Beddar.

“Thank you to all involved for making the annual Christmas party a special day for the children to remember and we take this opportunity to wish the readers all the best for the festive season and for 2015,” said Cheralle.

Every year the NEWS is overwhelmed by the eager response to the call for readers to come forward and “adopt” a child by buying a gift for that child. This year’s list consisted of 54 children.

Several readers bought presents for more than one child and this year the children also received handmade, soft toys made by Sophia Karamichael and Irene Ioannou. 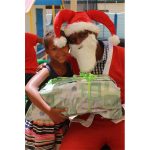 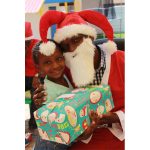 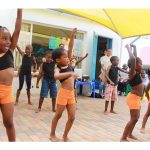 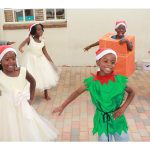 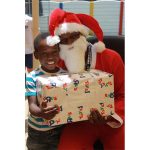 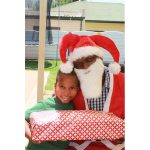 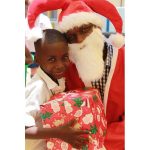 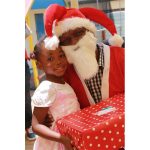 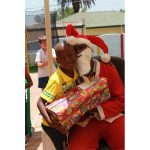 With the support of 7 Eagles Spur, Karaglen SuperSpar and De Backery in Edenvale, the NEWS not only handed out gifts but also hosted a fun-filled party.

The party kicked off with the arrival of the day’s special guest, Santa Claus (senior journalist, Brian Mchunu) who immediately started to hand out Christmas presents.

“It was extremely heart-warming to see the appreciation on every child’s face when opening their presents. Readers went the extra mile with the gift selection and each child received a beautiful present,” said the NEWS’ Editor, Marietta Lombard.

The handing out of the gifts was followed by a delicious lunch sponsored by 7 Eagles Spur, located in the Greenstone Shopping Centre.

Another surprise awaited the children when Wouter Mentz, from 7 Eagles Spur, and his staff handed out more soft toys from Spur and activity books.

Lunch was followed by a treat from De Backery in Edenvale with a sponsorship of delicious cupcakes.

The staff and sponsors spent several fun-filled hours with the children, who provided the day’s biggest and most overwhelming surprise by performing a few songs from Pinocchio’s annual concert.

The excellent work done by the principal and her staff was evident with this performance.

The Pinocchio Educare Centre is an early learning centre for the stimulation and development of children from impoverished and low-income families in Edenvale and the surrounding areas. Despite the financial constraints, Child Welfare South Africa Edenvale and the Pinocchio Educare Centre manage to not only continue, but in some instances improve, services offered to the community.

There were numerous changes at Child Welfare South Africa Edenvale over the past few years and under the leadership of the principal, the school pupils excel.

The NEWS and children from Pinocchio Educare Centre send out a huge thank you to our readers, 7 Eagles Spur, Karaglen SuperSpar and De Backery in Edenvale for making this day memorable.